Located in the 495/Metrowest region of Massachusetts approximately 24 miles west of Boston, Holliston is part of Middlesex County. Surrounded by the six towns of Medway, Millis, Sherborn, Ashland, Hopkinton and Milford, the Town is crossed by state routes 16 and 126. Interstate 495 is located several miles to the west and provides excellent access to the rest of the region as well as the cities of Worcester (25 miles) and Providence (36 miles).  The Town is 19.04 square miles or 12,186 acres.

The 495/Metrowest Compact Plan identifies Holliston as one of the 25 “Developing Suburbs” in the region. With the exception of the high rate of growth experienced by our neighboring communities in the last decade, Holliston seems to fit the description with its strong mixed-use town center, overall low density, limited extent of economic development, and primarily single-family home construction. Current population density is approximately 1.11 per acre or 711 per square mile. The median sales price of a single family home in Holliston in 2015 was $521,019.

Consistent with the Town Clerk’s census, MAPC continues to estimate that Holliston will experience an increase in population growth over 14% between 2000 and 2030 or a net of just under 1,000 new residents. Regionally the population growth is expected to be 1/3 of that of the nation. Due to the expected continued decline in household size, the number of households is projected to increase 17% from 2000 to 2030. MAPC projects that the region will also experience significant demographic shifts, including a relative decrease in all age groups under 55 and substantial increases in empty-nesters and elders as the “baby boomers” age.

The MetroWest Economic Research Center (MERC) at Framingham State University tracks trends for the nine Metrowest towns, including Holliston and its immediate neighbors Ashland, Hopkinton, and Sherborn as well as Framingham, Natick, Southborough, Sudbury and Wayland. Preliminary data released by MERC indicate that Holliston’s unemployment rate was 3.1% in the month of May 2016. Holliston has almost 450 business establishments (roughly 4.5% of the region) that employ roughly 5,300 individuals. Utilizing the North American Industry Class System of 11 jobs supersectors, Business/Professional Services is Holliston’s biggest supersector, with more than 70% of all establishments and 67% of the jobs in the Service-Providing Domain rather than the Goods-Producing Domain. Holliston remains a net exporter of labor; the town’s workforce is significantly greater than employment.

In addition to traditional population, employment and labor statistics, MERC tracks important quality of life indicators in a Cost of Living Index. Since 1991, MERC has conducted a survey twice a year, in April and October, to calculate the cost of living in Metrowest. The prices of a market basket of 57 representative goods and services are collected. MERC uses the data to create indexes that measure the percentage change in living costs in MetroWest over a period of time for six categories including housing, utilities, transportation, health care, and miscellaneous goods and services. The categories are weighted, based on importance, using information provided by the Bureau of Labor and Statistics (BLS) to create an overall index. Although the overall cost of living in Metrowest has been consistently higher than that of the Boston area, the spread is growing.

The MERC Greater MetroWest Economic Profile 2016 indicates that the cost of living in MetroWest was approximately 20% higher in October of last year than it was in 2009. From October 1997 to October 2005, the Metrowest Cost of Living Index experienced its largest increase, during the recession the overall index increased but kept pace with the Boston area and the nation as a whole with housing and transportation costs dropping. Only the cost of utilities in the Metrowest area has decreased after the recession and the biggest increase occurred in the transportation category. The costs of health, transportation and housing currently exceed pre-recession numbers. 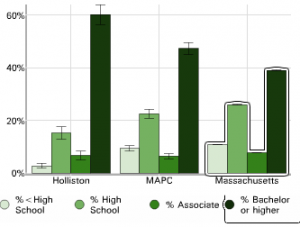 With its close proximity to Boston, Worcester and Providence, Holliston is conveniently located near many of the nation’s best schools and is home to many post-secondary educators. The metro-west campuses of Clark University and Becker College are located in nearby Southborough and Framingham State University in Framingham, 15 minutes away. Our employers benefit greatly from this highly educated workforce within easy recruiting distance.

Holliston is a member of the Metropolitan Area Planning Council (MAPC) Metrowest Regional Collaborative sub-region comprised of Holliston and the nearby towns of Ashland, Framingham, Marlborough, Natick, Southborough, Wayland, Wellesley, and Weston. We actively participated in the development of the Metrowest Regional Open Space Connectivity Plan through MAPC and the District Local Technical Assistance Program and we have participated in MAPC’s “Most Wanted Datasets Project,” which aims to create updated datasets for local and regional planning, including Water Management Act withdrawal permits and school enrollment forecasts. We are members of the MetroBoston Consortium for Sustainable Communities and utilize the 2008 MetroFuture Regional Plan in our local planning efforts.

Holliston is also one of the thirty-seven 495/Metrowest Development Compact communities. Adopted in 2012, the 495/Metrowest Development Compact Plan is a 20-year planning horizon comprehensive land use and development plan for the region, identifying both priority development (PDA) and preservation areas (PPA) for the region. Additionally, significant transportation and infrastructure improvements are identified. Collaborators in this planning effort include the Executive Office of Housing and Economic Development, MAPC, Central Massachusetts Regional Planning Council, Metrowest Regional Collaborative, the 495/Metrowest Partnership, and MassAudubon.